“Marquardt's DREAM THINGS TRUE vividly weaves to life the thrill of falling in love in the South while awakening readers to the struggles of US-Mexican immigration policies. In this touching coming-of-age story, full of hope and possibilities, Marquardt captures the bittersweet world of undocumented teens living in the US and the power of true love.” —Malin Alegria, author of Estrella’s Quinceañera and the Border Town series

“DREAM THINGS TRUE by Marie Marquardt is a story that must be told and needs to be read.  With sensitivity and care, Marquardt deftly illustrates the struggles and hopes of Alma, an undocumented teenager living in the United States.  Alma's story reflects the lives of millions of young people trapped between countries and cultures, longing for a place to belong.  An important story that's full of heart, it will forever change the way you view those who live their lives in the shadows.” —Jennifer Mathieu, author of The Truth About Alice

This innovative, heartfelt debut novel tells the story of a girl who’s literally allergic to the outside world. When a new family moves in next door, she begins a complicated romance that challenges everything she’s ever known. The narrative unfolds via vignettes, diary entries, texts, charts, lists, illustrations, and more.

NICOLA YOON grew up in Jamaica (the island) and Brooklyn (part of Long Island).She currently resides in Los Angeles, CA with her husband and their daughter, both of whom she loves beyond all reason. Everything, Everything is her first novel. 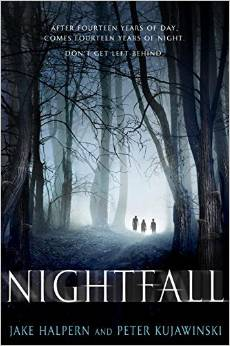 A story where edge-of-your-seat horror meets post-apocalyptic thriller, perfect for fans of Lois Lowry and The Mazerunner. Night is coming. On Marin’s island, sunrise doesn’t come every twenty-four hours--it comes every twenty-eight years. Each sunset, the townspeople sail to the south, where they wait out the long Night. None of the adults will tell Marin, Kana, or their friend Line exactly what happens when they leave the island, but when the three are accidentally left behind in the gathering dusk, they learn the truth: at Night, their town belongs to others, and those others want them gone. Fleeing through the now-alien landscape that used to be their home, the three confront shocking transformations and uncomfortable truths about themselves.  They are challenged to trust one another or perish. Marin, Kana, and Line must find their way off the island . . . before the Night finds them.

Jake Halpern is an acclaimed journalist, author, and radio producer who has written for several publications including The New Yorker and The Wall Street Journal.  As a contributor at NPR, Jake produced one of the most listened-to episodes of This American Life. He co-wrote the Dormia series with Peter Kujawinski and is the author of Bad Paper, a nonfiction book for adults.

Peter Kujawinski is an author and diplomat, currently serving as US Consul General for Alberta, Saskatchewan and the Northwest Territories. He co-wrote the Dormia series with Jake Halpern and has written for The New York Times. 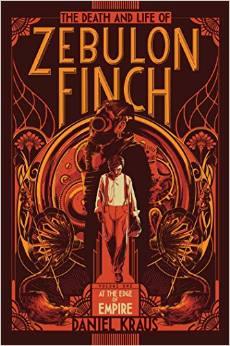 Daniel Kraus - The Death And Life Of Zebulon Finch, Volume 1: At The Edge Of Empire, Simon & Schuster Books for Young Readers; (On Sale: October 2015);

"A funny, poetic, big-hearted reminder that life can—and will—take us all by surprise.”
—Jennifer E. Smith, The Statistical Probability of Love at First Sight

The story of Lucille. Her dad went crazy. Her mom left town. She has bills to pay and a little sister to look after. Now is not the time for level-headed seventeen-year-old Lucille to fall in love. But love—messy, inconvenient love—is what she’s about to experience when she falls for Digby Jones, her best friend’s brother. With blazing longing that builds to a fever pitch, Estelle Laure’s soulful debut will keep readers hooked and hoping until the very last page.

The debut author Estelle Laure is a Vonnegut worshiper who believes in love, magic, and the power of facing hard truths. She has a BA in theater arts and an MFA from Vermont College of Fine Arts in writing for children and young adults. She lives with her two children in Taos, New Mexico.
Estelle was inspired to write this book by her own unorthodox teen years. At the age of sixteen, she graduated from high school and moved into a tiny apartment in New Mexico with a group of friends. She got a job, bought a car for $500, and began to learn how to be an adult. Without their parents around, Estelle and her friends raised each other. She learned to depend on her “tribe” for support, much like Lucille leans on her friends in the book.
Estelle says that “everyone is messed up, but most people have a great capacity for kindness.” In This Raging Light, Lucille and Wren receive much-needed gifts of food and household supplies from unknown “angels.” As a teenager living without parents, Estelle herself received support and kindness from adults who gave her sack lunches for school and rides to doctor’s appointments. Similarly, the character Fred is a based on Estelle’s real life friend, mentor, and former boss Fred Muller, owner of El Meze restaurant in Taos.

Posted by Susannah Greenberg Public Relations at 8:49 AM